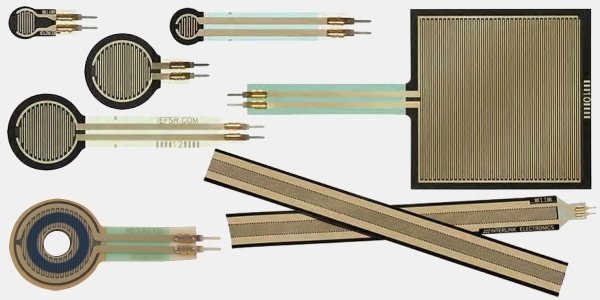 In this article, I will give you an idea of how to buy the right force sensor for your Applications.

What are Force Sensors??

Force sensors are devices that are designed to translate applied mechanical forces, such as tensile and compressive forces, into output signals whose value can be used to reflect the magnitude of the force.

Force sensors are available in a wide range of sizes and can be used to detect forces from fractions of an ounce to hundreds of tons. They are used in a wide range of products and applications such as bathroom scales, musical instruments, medical applications, automobiles to detect seat occupancy, and process control in manufacturing facilities, to name a few of the many uses for these devices.

The above Gif shows how the strain Gauge Load cell operates. Strain gauge load cells usually feature four strain gauges in a Wheatstone bridge configuration, which is an electrical circuit that balances two legs of a bridge circuit. The force being measured deforms the strain gauge in this type of load cell, and the deformation is measured as change in electrical signal.

FSR is basically a resistor that changes its resistive value depending on how much it has been pressed. When there is no pressure, the sensor looks like an infinite resistor (open circuit). The harder you press on the head of the sensor, the lower the resistance between the two terminals will be, but as you remove the pressure it will return to its original value.

Force sensors come in different sizes and with different measuring ranges, here are few steps you can go through to find the best force sensors suitable.

We sell different kinds of force sensors for measuring different ranges of weights/force. For example from 0-500gms  up to 30kg force with different shapes.

Before getting into the detailed steps of the force sensor selection, I will give you a brief idea of what unique force sensors will sell.

Define Your Application and Operating Environment

Before buying a force-torque sensor, you need to decide what tasks you are going to use it for. Of course, you may use the sensor for other tasks later on, but we’ve got to start somewhere.

First, ask yourself some questions about your application:

Then, think about the working environment where the force sensor will operate:

Be realistic about the number of resources you can devote to integrating the sensor into your existing systems. For example, some sensors might require you to add low-level electronics (e.g. analog circuits or TTL). These will take longer to integrate than sensors which include their own electronics.

Do you really need the best sensor or can you sacrifice a bit of performance? Which specifications are vital to your application? Which can you live without? Take time to work out what performance you will actually require of the force-torque sensor.

Force and Torque Measuring Range – This is the range of force and torque that the sensor can measure. They are often listed separately on manufacturer datasheets. To choose this value, calculate the highest force which you will want to measure in all directions. Don’t forget dynamic forces! These are higher than static forces and dependent on the velocity of impact.

Maximum Overload Capacity – This value represents the force that will provide permanent damage to the sensor. You really don’t want to be applying forces that are even close to this value.

Precision – There are three different specifications for precision that can be applied to force-torque sensors: Resolution, accuracy and repeatability. The most common to see on datasheets is Resolution, which is the minimal change in force that the sensor can measure.

Sensing Technology – There are many technologies used for measuring force, including piezoelectric, resistive and hydraulic. Some technologies are more suited to particular applications and environments than others. Traditionally, most multi-axis force-torque sensors use strain gauge technology.

The main usage of the Force sensor is to measure the amount of force applied. There are various types and sizes of force sensors available for different types of applications. Some of the applications of Force sensor that uses force-sensing resistors include pressure-sensing buttons, in musical instruments, as car-occupancy sensors, in artificial limbs, in foot-pronation systems, augmented reality, etc.