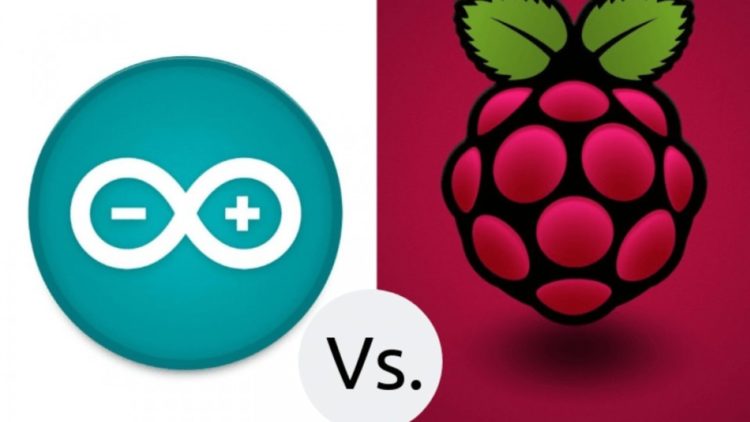 Both Arduino and Raspberry Pi are two popular platforms for electronics development among DIY builders, hobbyists, and even professionals. You would have come across them in numerous DIY and Industrial projects everywhere. If you want to know what they are, their differences, advantages, applications and specify which one to use in your next project then this article will answer all your doubts!

What is Arduino and Raspberry Pi??

Arduino is the original open-source project which popularised the DIY electronics trend and made it easy for everyone to start programming microcontrollers. People without programming or engineering experience can easily build custom hardware prototypes using Arduino.

Raspberry Pi is a Single Board Computer that is primarily targeted for teaching and learning to compute. It is just a small computer running Linux and using it to build projects is just like using a computer.

The Arduino is the only option if you want to build a high-performance embedded product, that is reliable, cost-effective to manufacture, and power-efficient.

So what is this Arduino Uno??

Arduino is essentially a Microcontroller development board using which you can Blink LEDs, accept inputs from Buttons, read data from Sensors, Control Motors, and many other “Microcontroller” related tasks.

Arduino includes a family of Official Arduino Boards and third-party hardware boards – Arduino UNO, MEGA, Arduino Nano, Due, Mini, Micro, ESP32, ESP8266, etc. All these boards can be programmed through the Arduino IDE in C++. The Arduino IDE consists of all the toolchains for editing source code, compiling, and programming the Microcontroller on the Arduino board.

The hardware and software ecosystem is extremely popular and numerous libraries, examples, tutorials, and guides are available online to help you get started and build. Arduino has simplified the process of extensive coding and library problems with plug-and-play style and quick programming. Using a single software (the Arduino IDE), you can write the code, compile it and upload it to the Microcontroller.

You also don’t need separate hardware for uploading the program. Another important thing about Arduino is it is open-source. This means the design files and the source code for software and libraries are freely available. You can use the hardware design files as a reference and essentially make your own Arduino board.

What about the Raspberry Pi??

Raspberry Pi was developed by Eben Christopher Upton at the University of Cambridge in the United Kingdom with the aim of teaching and improving the programming skills of students in developing countries. While Arduino is a Microcontroller based development board, the Raspberry Pi is a Microprocessor (usually an ARM Cortex-A Series) based board that acts as a computer.

As Raspberry Pi is essentially a full computer, it can run an Operating System. The Raspberry Pi Foundation, the organization which is responsible for designing and developing Raspberry Pi SBC, also provides a Debian-based Linux distribution called the Raspberry Pi OS (previously known as the Raspbian OS).

Another important thing about Raspberry Pi is, as it is a Linux-based computer, you can develop software using several Programming Languages like C, C++, Python, Java, HTML, etc.

Despite its original intention, which is to promote programming (like Python and Scratch Programming Languages) in schools, the original Raspberry Pi SBC became extremely popular among DIY builders, hobbyists, and enthusiasts for developing several applications like Robotics, Weather Stations, Camera-based security systems, etc.

The hardware design files and the firmware of Raspberry Pi are not open-source.

What Projects can be built with Arduino??

What Projects can be built with Raspberry Pi??

Arduino vs Raspberry Pi – Which one to choose??

An important factor to consider in the Raspberry Pi vs Arduino debate is the projects you are able to do with the board. If you already have a project in mind, then it is very important to know the capabilities of each board and what you can get out of it.

If your end goal is learning or building a product for production: choose Arduino, get familiar with microcontrollers, and move to a microcontroller that is best suited for your product.

If your end goal is just building projects for fun and PoCs you will get the job done faster with Raspberry Pi. It is not recommended to use Raspberry Pi in production devices.